“My love for you is a journey. Starting at forever, and ending at never.” – Anonymous

How they met
Love is indeed a lifelong journey, right? For Shobhana and Amit, this journey began at age 7 in Bishrampur, Chhattisgarh. They first met as kids in 1997. Shobhana was a complete tomboy then and Amit, a very shy kid. So friendship didn’t exactly blossom among the two and by the year 2000, Shobhana relocated to Bilaspur. But yahan se shuru hota hai…Kahani mein twist!

Amit got to know about Shobhana’s relocating only once the summer vacation was over. He was always fond of her and wanted to connect with her somehow. He decided that a letter would be a great way to communicate but only him writing it could raise many eyebrows! So, in a smart move, he convinced his classmates to write a collective letter to her and also arranged for the group to contribute money to post the letter to her new school in Bilaspur. But unfortunately, Shobhana never got the letter! However, Amit never lost hope. In the coming years, he participated in many competitions held between different DAVs in that particular zone, and Bilaspur being the zone capital, most of the tournaments and competitions were held at the Bilaspur DAV aka Shobhana’s school. “He would always come to Bilaspur during those tournaments and try to meet me (in the name of meeting my mother, who was once his teacher and now was teaching at Bilaspur DAV). But alas he could never meet me,” says Shobhana.

Many things change over the years, right? And so, while the couple in question, moved away, grew up and made life decisions, fate conspired to bring them together yet again! “My MBA college happened to be in Hyderabad and before the course started, I began searching on Facebook for common friends in the same college and incidentally, I found Amit’s name. So I dropped a message to enquire about the rules and regulations of the college and other stuff.” – Shobhana.  This was ICFAI Business School or IBS, Hyderabad. Amit turned out to be a year senior to her in the course.

In his reply, Amit directly asked her for her number and got in touch.

“We talked for two hours. That was the first time we were talking in 12 years. Then in  June 2012, I joined college but never got in touch with Amit again. After a couple of days, the session started, he called me and enquired of my well-being. To which I answered half-heartedly, as I was busy with my assignments and projects. He asked me that he would be going to the city, would I want anything (our college was 50 km away from the city in Hyderabad, on a hill, amidst the forest) I just asked him to bring me some medicines. The next day Amit called me in the afternoon and asked me to meet him near the clinic on the campus, where I used to usually hang out with my friends. I was sitting with one of my friends, on the pavement and here comes Amit carrying a big polybag filled with Mangoes and medicines.” – Shobhana.

When they met, it was really awkward. They hardly spoke to each other beyond hi-hellos. It was a strange situation as they had last met each other in person when they were 10 years old and now they were 22! “To me, Amit was still a sweet shy chubby guy like I remembered him, in his school uniform. And now in front of me, there he was at 5 feet 11 inches and 120 kgs man. Quite a change.” – Shobhana.

Shobhana took the packet, said thank you as he asked her to stay in touch. But life and the MBA course got in their way. Yet, Amit continued to notice her running between classes and all. Later when she was having trouble with certain subjects, it was Amit who helped her out. They would study in the library post classes. And here is where Shobhana earnestly fell in love with him. He even sneaked in her favourite foods!

Their love story bloomed. “In 2013, I met with a very severe accident. All the ligaments of my left knee were completely destroyed. I underwent knee surgery and had to learn to walk again. It took me a complete year to walk properly again. He was constantly there with me and for me, during that phase as a strong pillar of support. He always loved me unconditionally. But now my love and respect for him increased 10 fold. And now we knew and were sure that we wanted to spend the rest of our lives with each other.” – Shobhana.

But here’s another twist – while Amit loved Shobhana deeply, he wasn’t able to be upfront and confess his love for her in front of his parents. And this irked Shobhana. Finally, when he did manage to talk to his mother about her, it was an outright NO.

“I was a Bengali girl and they were Brahmins from UP. In his parents’ eyes, it was a difficult relationship and a task to explain to the elders in the family and the relatives. That day I cried a lot.” – Shobhana.

Amit declared that he would only marry Shobhana. However, they were sure about two things – 1. They wouldn’t get married without their parents’ consent and 2. They would keep on trying to convince the parents. In 2018, they were finally engaged.

“Yes, it was a long journey of convincing; 2013 to 2018. There were also lots of fights between us regarding this. At times I did have doubts that would he be able to do it or not. But we didn’t lose hope or give up and went through this together. And finally, we made it happen. We got married on 27th January 2019. So here is our very own “Two States” story. 23 years of knowing each other, 8 years of companionship, 1 year of marriage, a lifetime of togetherness and a beautiful story to cherish!” – Shobhana.

The couple tied the knot on 27th January 2019 at the Raj Palace, a 300-year old heritage palace hotel in Jaipur – the oldest and one of the first palaces built by the royals.

The wedding planning
Shobhana loves to micromanage! As they were based out of Mumbai, they had decided to get married in Bilaspur initially but soon realised that Shobhana’s mother was finding it really difficult to plan everything single-handedly. Therefore, they decided on turning it into a destination wedding!

“But it was late, considering my wedding was in January 2019 and it was September in 2018 already. By this time most of the properties were booked for the dates we were looking for. We were looking for booking from 24th to 28th January. But these were the hot selling dates due to the weekend and Republic Day. I contacted 52 properties. From Umaid Bhavan to Udaivilas, everything was sold out. I was really upset. But then I came across Raj Palace. I read about the palace, its history. Watched some videos and fell in love with the property and when I contacted them, fortunately, they were not sold out yet on the dates we were looking for but they had already received many enquires for the same dates. Hence we didn’t delay. We had a word with the GM of the property and flew to Jaipur to meet them and check out the property and finalise the deal.” – Shobhana.

As someone who is a perfectionist and wanted things her way, Shobhana flew to Jaipur a couple of times to discuss and plan things with the Raj Palace’s Management and Operations team as they don’t allow outside vendors or wedding planning team, since its a heritage property and they want to avoid any kind of damage to the property, which can happen if outside vendors are allowed.

“But it turned out to be a boon as it cut down on the hassle of coordinating with 10 people and also, their team is very efficient, friendly and highly experienced. Till date, their team have planned more than 300 weddings (better than many wedding planners).”

The Sabyasachi bride
“The funny thing is I did shopping for my wedding lehenga and other dresses at Sabyasachi all alone. While all the brides-to-be came to Sabyasachi with at least 2 to 3 family members (as its a big decision to purchase your wedding attire), every time I went to Sabyasachi I was alone as I went there after office or whenever I got time between the meetings, as my time on weekends was dedicated to making the purchase decisions for Amit and other family members. But, it was fun! In fact, I finalised my wedding lehenga at Sabyasachi within 10 minutes, as I already did my research and was clear what I wanted and how I wanted to look on the D-Day and on the other functions.” – Shobhana.

Being the feisty girl she is, Shobhana had her own baraat entry!

Tips for other brides and grooms 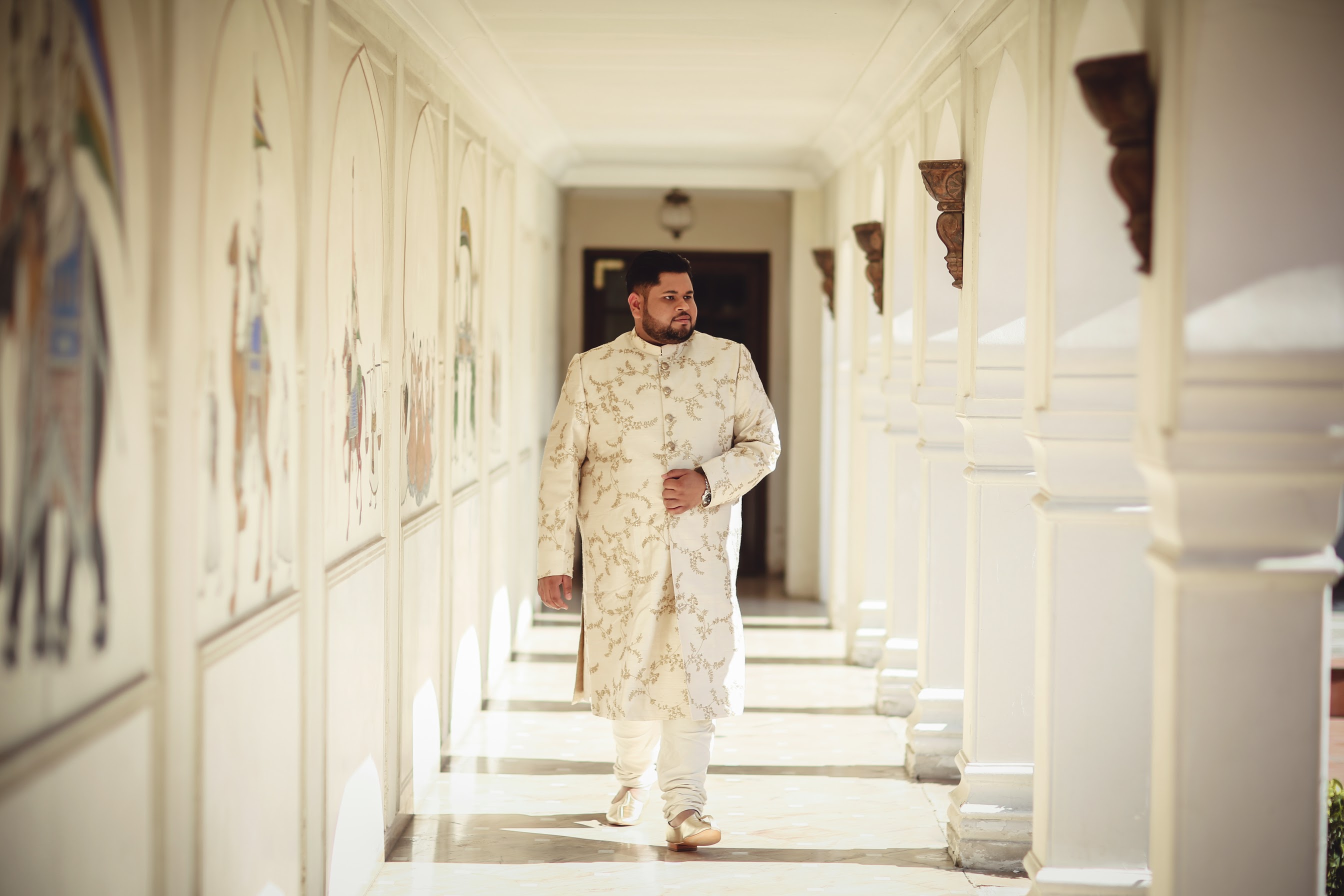 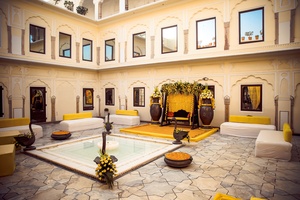 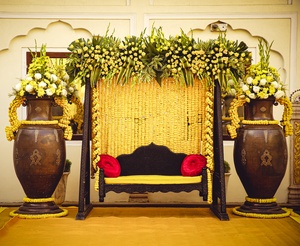 20+ simple mehndi design ideas to save for weddings and other occasions! Mehndi is an integral part of all festive occasions in the Indian subcontinent. Right from wedding to festivals like Eid, Karwa... Nov. 3, 2022 20 Orange Lehengas that prove 'Orange is the New Red' when it comes to Bridal Lehengas! Orange is definitely the new red when it comes to bridal lehengas. Orange lehengas have been trending this wedding season and h... Oct. 1, 2022 Top Winter Wedding Venues in Mumbai for the Dreamiest Celebration Budding skyline, serrated coast, and buzzing lifestyle, the larger-than-life charm of Mumbai city is even reflected in the gran... Sept. 5, 2022 Wedding Dates in 2023: Check Out Auspicious Hindu Marriage Dates for Your Big Day Image Source: Dipak Studios Looking for the best Hindu Wedding Dates in 2023 to tie the knot with your one and only? We alre... Aug. 10, 2022 Simple Mehendi Designs 2022 to Bookmark for All Occasions! Image Credits: Shutter down Photography When it comes to Mehendi designs 2022, there is no such phrase as enough research. L... July 21, 2022